What is the effect of stainless steel passivation?

Passivation is a method to transform the metal surface into a state that is not easy to be oxidized, and to delay the corrosion rate of the metal. In addition, the phenomenon that an active metal or alloy becomes a noble metal with its chemical activity greatly reduced is also called passivation.
Passivation advantages

1. Compared with the traditional physical sealing method, the passivation process has the characteristics of absolutely no increase in the thickness of the workpiece and no change in color, which improves the precision and added value of the product and makes the operation more convenient;

2. Since the passivation process is carried out in a non-reactive state, the passivation agent can be added and used repeatedly, so the life is longer and the cost is more economical.

3. Passivation promotes the formation of a passivation film of oxygen molecular structure on the metal surface, the film layer is dense, the performance is stable, and it has a self-repairing effect in the air, so compared with the traditional method of applying anti-rust oil, the passivation formed The passivation film is more stable and corrosion resistant. Most of the charge effects in the oxide layer are directly or indirectly related to the thermal oxidation process. In the temperature range of 800-1250~C, the thermal oxidation process with dry oxygen, wet oxygen or water vapor has three continuous stages. First, the oxygen in the ambient atmosphere enters the formed oxide layer, and then the oxygen passes through the two Silicon oxide diffuses to the inside, and when it reaches the Si02-Si interface, it reacts with silicon to form new silicon dioxide. In this way, the oxygen entry-diffusion-reaction process continues to occur, so that the silicon near the interface is continuously converted into silicon dioxide, and the oxide layer grows into the silicon wafer at a certain rate.

The mechanism of passivation can be explained by film theory, that is, it is believed that passivation is due to the action of metal and oxidizing substances, and when it acts, a very thin, dense, good covering performance is formed on the metal surface, and it is firmly adsorbed on the metal surface. On the passivation film. This film exists as a separate phase, usually a compound of oxidized metal. It plays the role of completely separating the metal from the corrosive medium, preventing the metal from contacting the corrosive medium, so that the metal basically stops dissolving and forming a passive state to achieve the role of anti-corrosion. 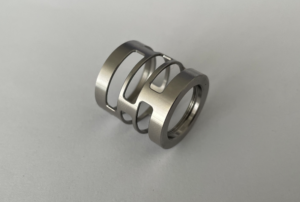